Birdie (born September 22, 2004, often referred to as strawberrix, lücifer, jack, and formerly known as alias) is an American animator and artist, and famous individual of the animation meme community.

Polly was Birdie's first fursona, and dearly his most popular character across the animation meme community. She is an anthropomorphic avian character possessing yellow feathers, orange beak, and blue clothing.

Pinkilicious is a newer fursona of Alias, proceeded by Birdie. He was created in October 2019. The character itself is an imitation and mockery of typical 2000s to early 2010s characters sporting erratic bright colors, and often referred to as "sparkledogs" or uncommonly "sparklecats".

This controversy section is for historical and educational purposes. Do NOT harass this person for those specific controversies mentioned here, neither they're done before or very recently.

Rosey, Birdie's girlfriend at the time got her phone taken away and reset. Instead of telling the truth about what happened, Rosey pretended to be a friend of herself and told Birdie that she was in a coma. A troll came along, pretending to be Rosey, and said that she had three days left to live. In the end, the troll revealed themselves and Rosey told the truth about her phone being reset.

Of all the drama he's been involved in, this is possibly the most well known case. Back when she was a Kittydog fangirl, Birdie made an alternate account called psycho!birdie. On this account, she uploaded a video of himself killing Kittydog fangirls to the song "Pretty Little Psycho".

Much later Birdie was saying that he wanted to kill Kittydog.

Chicken Brent does not approve

Dogedust and Fontik went against Birdie and started bullying her. In response Birdie made the wonderland meme as a vent which made things a whole lot worse.

Apparently, Birdie was posting memories of Fontik and herself. Birdie had supposedly accidentally revealed Fontik's face and name. Even after claiming it was an accident, many people insisted that he purposely doxxed her.

In this drama, Dogedust faked suicide to go onto her old account "Doki Paul". During this time, Birdie was really depressed because they thought that Dogedust was actually dead. It turned out that it was all fake and Fontik and Dogedust had planned it.

Around February 2018 during her live stream with her friends, Birdie and her mom were arguing about the privacy of their address and leaking it to Dogedust in the middle of the stream. Her mom threatens to shut down her monitor, call the police, and explains it's perilous. Birdie asks for the promise for the moment, leave her, but continuously refuses her mom's demand for safety. Her 3 friends agree with his mother's statements and demand Birdie to follow her mom's behest.

In February 2018, Toxikai, Dogedust, and the rest of her server decided to collaboratively false report all of Birdie's videos in hopes of terminating her channel. After the plan was successful, Birdie's channel got terminated. As a result, Dogedust and Toxikai received backlash from all of Birdie's fans. Toxikai rightfully accuses Dogedust's fault as Toxikai only mentioned the plan.

Users speculate that the reason behind of terminating Birdie's channel is to sacrifice in saving Birdie from tendencies of committing suicide.

During the controversy, Toxikai broke up with Birdie for unknown reasons.

After the breakup, he explicitly asked to conduct inappropriate roleplay with some of Birdie's friends, and when they all rejected him, he threatened to exterminate the entire animation meme community in the mass reporting, which frightened many users and animators into private their videos to avoid this circumstance. He did not have very much success in doing so.

He became notorious in the community and mockingly referred to a sexual harasser frequently. This also sparked a trend where users ship Toxikai with Spoctor during the state of falsely accused of being a pedophile.

Around 2020, Birdie outbursted after another animator, Himeguts, broke up with her. As a result, she ended up making hateful art out of them in his DeviantArt account, hate videos (mostly in his alternate accounts, such as "gamers against himeguts", "jack the edgelord", "7" and "LUCASFER") and trash-talking them on his Discord channel.

With her low reputation on DeviantArt, she attained some group of trolls and their spam comments of mostly lyrics of songs on his posts. A lot of their usernames end with "guts" or "gutz", imitating himguts' username, and contain deviations of traced or imitated of other artwork of mocking and harassing her. The group of those users is often referred to as "gutz gang". 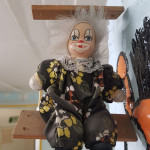 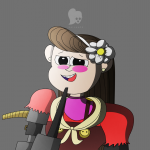